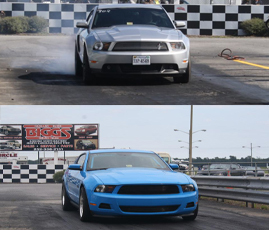 - Born In Maryland, moved to Va. Beach in 1974. Upon graduating Kellam HS, attended TCC with a major in Automotive Technology. Worked at Household Finance as a senior collector for 6 years, then worked as an automotive tech for 2 years before working as a Transportation Officer and ERT member (Emergency Response Team) at the Hampton Roads Regional Jail for 5 years. I have always enjoyed modifying cars, beginning with my first car, a 1974 Mustang. Shortly after that car, I purchased a 1965 Mustang coupe and a 1987 Plymouth Horizon that was "beaten daily". A new 1989 Mustang 5.0 started a craving for more power, quickly modifying it with a Ford Racing (Powerdyne) supercharger. Soon after, tuning became available in the form of the handheld Crane Interceptor, which came to be known as the PMS (Programmable Management System). This allowed me to make more power and thus began my passion for tuning cars. Since opening the business, I have become proficient in tuning Fords, Chevys and Dodges utilizing the latest software available from SCT, Diablosport and HP Tuners. Current cars: 1999 Corvette- lots of mods, making 450rwhp, 2003 Audi RS6- stock with the exception of an APR (Audi Performance Racing) chip which bump power to 520hp/530tq (currently the fastest chip only RS6 in the country!), 2005 Ford F250 Harley Davidson 6.0 Diesel- 380rwhp/850rwtq, 2005 Ford Explorer 4.0- custom tuned for economy and better shifting. Hobbies: Road racing, Drag racing, working out, reading, going to the movies and spending time with family

(Kelley Performance) - Born and raised on the Eastern shore of Maryland, I found a desire for cars and racing at an early age. My father was interested in drag racing and street racing as well (sorry dad...lol) and he taught me a lot as a young boy. It wasn't long before I was side by side , modding cars with him. My first car was a 1972 Chevy Monte Carlo. I owned several classic Chevrolet's early on and then made my way into the Mustang scene. Moved to Virginia in 1991 and made a home here with my wife Angela, who has been a big supporter of my racing endeavours. Kelley Performance was opened in January 2008, after years of working at MAS Racing in Va. Beach, which was one of the areas premier Mustang and performance shops until closing in 2007. Several cars that I have built and/or owned have been in major publications such as Muscle Mustangs and Fast Fords and some have even sold at the famous Barrett Jackson auto auctions. I take great pride in the work that I do and look forward to serving this area for many years to come.

What our customers say!

What is DYNO TUNING?

Dyno Tuning is a scientific process designed to fine tune engine power output. Dyno tuning allows us to perform the proper adjustments to your vehicle without guessing. The outcome is a precisely calculated power and torque curve providing increased horsepower, gas mileage,engine response, and overall performance.

DTP uses a Dyno Dynamics Dynamometer to measure the power output of your engine. Our current pricing structure and guidelines to remember when using the dynamometer are as follows:

If you have a hand-held tuner, SCT X Calibrator or Diablosport Predator, bring it with you!

Put street tires (not slicks) on the drive wheels for dyno runs. (Recommended pressure is 40psi while on the dyno)

If you are performing your own tuning, have a plan. The clock starts running when the car straps down to the dyno

We utilize a Dyno Dynamics - 2WD 450DS Dynamometer capable of graphing up to 1200 HP.

We don't guess, WE KNOW! So you aren't paying someone by the hour for "Guessing".

Nothing is worse than paying someone who doesnt know what they are doing. We get it done without guessing, and done right the first time.

We have the most performance experience in the area!

Look at our reviews! We have over 50 years of performance knowledge.

We give you Maximum Horsepower!

We Tune some of The World's Fastest 1/4 mile cars!